I have discovered the secret weapon behind Chris Carmichael's success with climbers.

Chris is the coach behind Lance Armstrong's magnificent performances in the mountains of France. Now that we've had two Tours in a row in which other extraordinary climbers have been thrown out for illegal substances, many minds wonder what Lance was on (besides, as his famous Nike ad said, his bike for six hours a day).

Fortunately, for the right sum, Carmichael will tell us. Let's look at his advertisement (Bicycling magazine, July 2008, page 113): 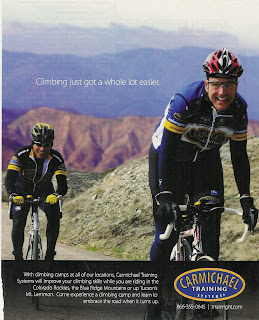 Gives away nothing, does it? Now look at it again.

First, you'll have to ignore the model on the left who has the posture of a squat toad and the expression of someone who has just swallowed one. The one on the right is the one we are all supposed to aspire to be.

Ignore the geological oddity of this place, where each hill seems to be composed of entirely different substances. If the hills you train on don't look like that, well, that also explains why you aren't winning any Tours de France.

Ignore the extraordinary sharpness of the bleached rocks in the middle distance. Why did they use a photograph where rocks, not bicyclists, were in focus? No doubt because the Carmichael-trained cyclists ride so fast, no camera can capture their movement.

Focus, instead, on what's between the “dancing on his pedals” rider's legs. No, no, not like that! Here's the detail:

It's extraordinary. Where you would expect to see the background (of rock and grass in unearthly focus), you see...the fragment of a yellow oval with the letters “MIC” in the upper half, looking exactly the same as Carmichael's logo. And just a bit lower is what appears to be a third wheel for the bicycle, with a tire of clearly different type, hovering in the air, as if ready to drop like landing gear on demand. And if you look further down this montage (not—it is now clear—ever to be confused with a montagne), to the left of Carmichael's corporate logo you'll see a profusion of chains and gears and drivetrains and other instruments of S-and-M. (And the typo in the URL—trrainright.com—is just a bit of icing.)

When Lance won at Limoges, he said he rode with “the strength of two men”. Now, for a small fee, you too can have your second man.

Or, maybe it's possible that the secret to Carmichael's success is something else entirely.

Shoot, I thought you were going to point out the TIME machine he's riding.

Perhaps they couldn't get a picture with both bikers smiling IRL.

What a great article!

Are those tires really the best choice for the _dirt_ road they're climbing?

Whizbo, I wondered about that. But you know how semi trucks have extra wheels? Maybe that's what's going on here. When you flat, no need to stop: just drop your extra wheel, and whoosh, off you go.

Nice find! I'm also wondering about the head of the guy on the right. The size and angle don't seem quite right for the body and body position. And seeing everything else that's been doctored here, you figure the Photoshop geniuses wouldn't have had much hesitation to swap in body parts, too.

They were stupid enough to not buy that domain. My friend called up Carmichael and they had no clue what was going on!